Markus Library: Past and Present 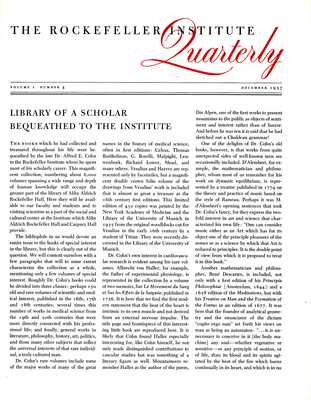 Most of the books in the Rare Books Collection were bequeathed by Alfred Einstein Cohn (1879-1957), emeritus of The Rockefeller Institute, one of the first cardiologists in the U.S, a scholar whose interests encompassed many fields and earned for him high regard in the world of culture.

Roughly the collection could be divided into two classes: old and rare volumes of scientific and medical interest, published in 16th, 17th and 18th centuries and works in medical science from the 19th and 20th centuries that were more directly connected with his professional life. Dr. Cohn's rare volumes include some of the major works of many of the great names in the history of medical science, often in first editions: Celsus, Thomas Bartholinus, G. Borelli, Malpighi, Leuwenhoek, Richard Lower, Mead and many others.

The Rita and Frits Markus Library