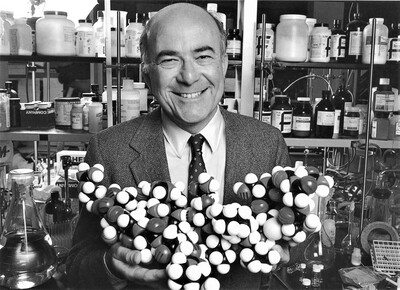 Emil Kaiser in his laboratory, circa 1985

Emil Thomas Kaiser (1938-1988) was a Hungarian-born American biochemist. He was most notable for his research on enzyme modification. He also was noted for developing new types of catalysts and for a more active form of a peptide hormone.

Kaiser was the Louis Block Professor at the University of Chicago, the Patrick E. and Beatrice M. Haggerty Professor at Rockefeller University, a member of the National Academy of Sciences, the American Academy of Arts and Sciences, the National Institutes of Health] and the National Science Foundation. The Protein Society has established an award in Kaiser's name - The Emil Thomas Kaiser Award which "recognizes a significant contribution in applying chemistry to the study of proteins.”