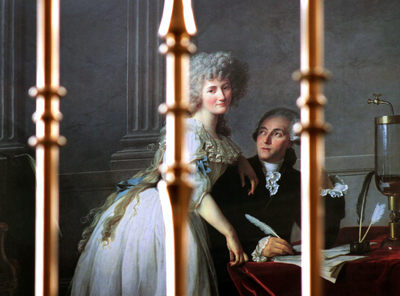 In 1925, John D. Rockefeller, Jr. was inspired on seeing this beautiful painting of the chemist and his wife. He thought almost immediately of the young Rockefeller Institute because this portrait had an extraordinary quality of bringing art and science together. Before buying it, however, he sought the “frank opinion” of William Welch, head of our Board of Scientific Directors, and Rufus Cole, director of the Hospital. He asked them how they ranked “Lavoisier as a scientist and how appropriate his portrait would be in the Institute.” Both Welch and Cole assured him that Lavoisier was a leading man of science in all of history and that chemistry had entered on its modern phase through his work. Lavoisier was a symbol of the explanatory power of the chemical view of life. Not coincidentally, this was a view that was being vigorously advocated at the Institute by one of its original members, Jacques Loeb. Yet, neither Welch nor Cole was certain whether the Institute was the most suitable place for such a “priceless possession.” As Welch told Mr. Rockefeller, “We have no great hall … for the reception of such portraits.” Nonetheless, Mr. Rockefeller bought the portrait in 1925 and hung it in his New York City apartment. By 1929, he also ensured a new Library was built with the main reading room as its “great hall” Most especially, the Library’s architects designed a grand space in this room for displaying the David painting on the north wall. For nearly fifty years it dominated the serene peace of the Library. Today it is owned by the Metropolitan Museum of Art and grandly displayed in the European Paintings Gallery.

The Rita and Frits Markus Library