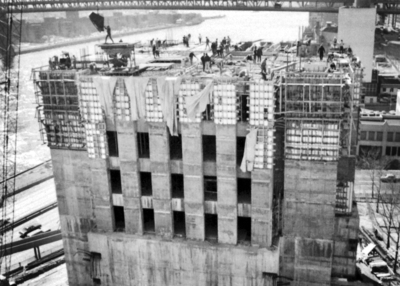 The seventeen-story Weiss Science Tower was designed by Nelson W. Aldrich, principal at Campbell Aldrich & Nulty and cousin to the Rockefellers. The tower is simplistic in its design, with powerful corner piers that bookend distinctly classical facades. A light base of black glass rests under the heavy stone mass with narrow vertical windows recessed within limestone bands that run the majority of the building’s height, topping out with a weighty capital of limestone and glass. The whole composition, aside from the corner piers, recalls a geometricized classical column to an almost cartoonish extent.

The massive tower was completed in 1971 and housed offices and laboratories. The other addition to the southern end of the campus, which somewhat compliments Weiss is the Raymond F. Stainback Comparative Bioscience Center, a bulky ribbed concrete building with ribbon windows, surrounded by windowless concrete piers on each corner. The Bioscience Center, built in 1975 and designed by Raymond F. Stainback, is linked to Weiss.