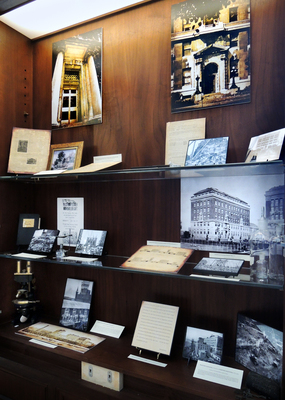 In the spring of 1897, Frederick T. Gates was on vacation in the Catskills when he read a book titled Principles and Practice of Medicine. The book, by Sir William Osler, was to have a profound influence on Gates, who had become the philanthropic advisor to John D. Rockefeller, Sr., in 1981.

From his observations at sickbeds and his conversations with physicians, Gates had become skeptical about the current state of medicine. At the turn of the century, the toll taken by infectious disease in the United States was a sobering statistic. The thousand-page Osler survey confirmed Gate's skepticism, but it also made him aware of the potential of scientific investigation for solving the mysteries of disease. "...it seemed to me," Gates later wrote, "an institute of medical research ought to be established in the United States. And here was an opportunity for Mr. Rockefeller to do an immense service to his country and perhaps the world."

When Gates sent his memorandum to Rockefeller, the industrialist was in the process of withdrawing from the active management of the Standard Oil Companies. Although he was preoccupied, Rockefeller did not ignore the memorandum. In January 1901, Rockefeller, Sr., agreed to establish the institute.

Not long afterward, on June 14, 1901, the Rockefeller Institute for Medical Research was incorporated, and a charter was adopted stating, "The purpose of the corporation is medical research with special reference to the prevention and treatment of disease." ( From Institute to University: A historical sketch of The Rockefeller University, 1983)