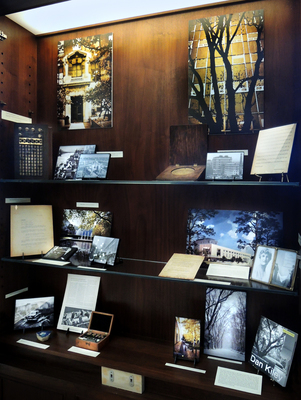 After three decades of service, Flexner, at the age of 71, announced that he wished to retire as soon as a successor could be chosen. George Corner has summarized how things stood at the Institute in the spring of 1934: "As he went to his office every day, Flexner could see the four chief buildings housing twenty-two active Members, with twelve Associate Members, about thirty Associates, and sixty Assistants and Fellows - a staff numbering more than one hundred and twenty, which he had built up from the twelve who began work with him in the temporary laboratories on Lexington Avenue... On the library shelves were an even hundred volumes of bound reprints, Studies from The Rockefeller Institute, reporting the researches of those years... and he knew that scattered through the heavy volumes were the records of achievements that placed The Rockefeller Institute in the front rank of the world's scientific institutions. He knew too that its influence as a training center for the universities has been incalculable. One hundred and fifty-two persons had hone out... to become professors and associate professors in sixty-two American universities, colleges, and professional schools, and twenty to equivalent positions in seventeen foreign countries."