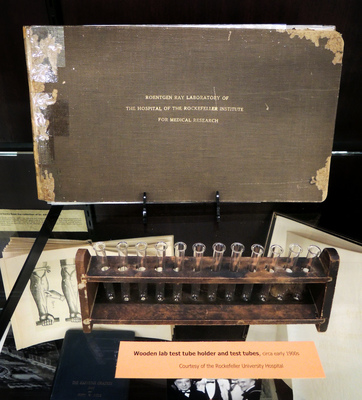 Admission log journal, Roentgen Ray laboratory of the Hospital of the Rockefeller Institute for Medical Research, 1921

Courtesy of The Rockefeller University Hospital

Roentgen ray is a term coined around 1890 that preceded X-ray and named for Wilhelm Roentgen, a German professor of physics. Roentgen wanted to prove his hypothesis that cathode rays could penetrate substances besides air. When he saw that he could film his thumb and forefinger and their bones on a screen, the story goes, he replaced the screen with a photographic plate and X-rayed his wife's hand. Roentgen's report of his findings, On a New Kind of Rays, was published by the Physical-Medical Society of Wurzburg in December 1895.