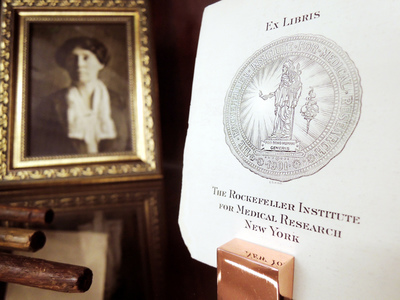 The first logo (seal) designed in 1904 by Francis Scott King was featuring Aesculapius (the Greek God of medicine) with a caduceus standing near small crossed alembics. It was in use for fifty years until the change in the Institute’s name in 1954 brought forth a need for a change in the traditional seal. It was decided to re-design it completely. Rudolph Ruzicka, of Boston, Massachusetts, a distinguished American artist, and engraver, was commissioned to the design. He determined that an almost purely typographical design would be superior to any of the rather strained and formal symbols that might be used. He retained and indeed made dominant, the original motto Pro Bono Humani Generis, which has appeared almost microscopically on the first Institute’s seal.