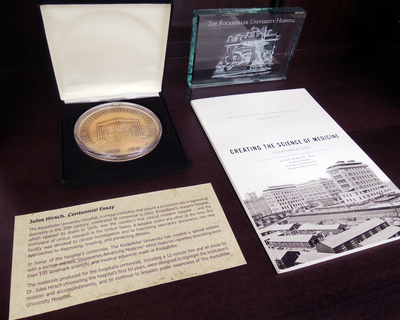 The Rockefeller University Hospital, a unique institution that played a prominent role in biomedical discovery in the 20th century, celebrated its centennial in 2010. Rockefeller’s research hospital, which opened its doors in 1910, was the country’s first clinical research hospital – and the birthplace of clinical research in the United States. A hospital unlike any other at the time, this facility was devoted to clinical investigation and to translating laboratory discoveries into new approaches to diagnosing, treating, and preventing disease. In honor of the hospital’s centennial, The Rockefeller University has created a special website with a section entitled “Discoveries Advancing Medicine” which features vignettes describing more than 100 landmark scientific and medical advances made at Rockefeller. The materials produced for the hospital’s centennial, including a 12-minute film and an essay by Dr. Jules Hirsch chronicling the hospital’s first 50 years, were designed to highlight the institution’s mission and accomplishments, and to continue to broaden public awareness of The Rockefeller University Hospital.