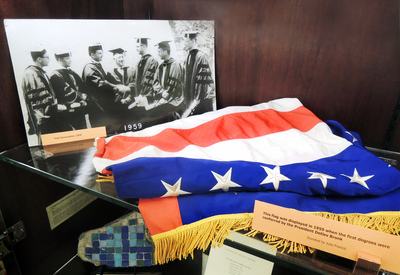 This flag (donated by Julie Francis) was displayed in 1959 when the first degrees were conferred by President Detlev Bronk. In the background is the photograph of the first graduating class.

In 1954, The Rockefeller Institute assumed the status of a graduate university, extending the scope of this educational function to include work at the doctoral level for a carefully selected group of young men and women who display unusual potential for contributing to the nation’s scientific progress. The first Ph.D. degrees were awarded in 1959. In 1965, the institution’s name was officially changed to The Rockefeller University.