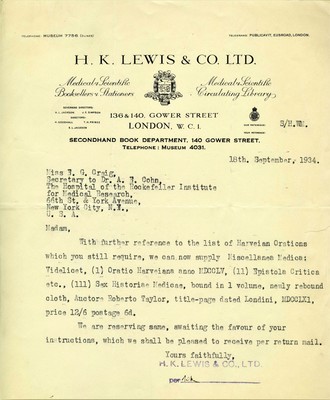 Alfred E. Cohn (1879-1957), physician, humanist, author, and bibliophile, was one of the first cardiologists in the United States. He was born in New York City and received an MD from the College of Physicians and Surgeons at Columbia University in 1904. Between 1907 and 1909 he studied in Freiburg, Vienna, and London. When he returned to the United States, Dr. Cohn joined the staff of Mount Sinai Hospital in New York. In 1911, he moved to the Rockefeller Hospital, bringing his electrocardiograph with him. He remained at Rockefeller for the rest of his career, retiring in 1944. Dr. Cohn took a leading role in organizations such as the New York Heart Association, New York Academy of Medicine, Veterans Administration, China Medical Board, Asia Institute, Sydenham Hospital, and the Committee for Displaced Foreign Scholars and Displaced Foreign Physicians.