Map of the Town of Norfolk, Litchfield County, Connecticut 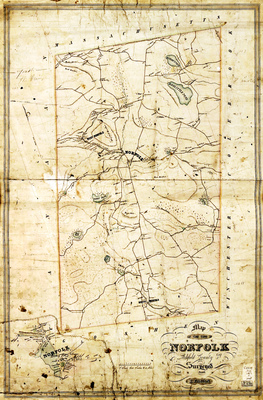 Map of the town of Norfolk, Litchfield County, Connecticut, 1853

Courtesy of the Library of Congress

William H. Welch was born in Norfolk, Connecticut. He received his A.B. in 1870 from Yale University and his M.D. in 1875 from the Columbia University College of Physicians and Surgeons. After interning at Bellevue Hospital in New York, Welch studied at the universities of Strasbourg, Leipzig, Breslau, and Berlin from 1876 until 1878. Returning to Bellevue Hospital Medical College, Welch held an appointment as professor of pathological anatomy and general pathology. While there, he established the first pathological laboratory and discovered the organism named Bacillus welchi that causes gas gangrene.

In 1884, he agreed to take a position at the hospital and medical school that were being organized in Baltimore through the bequest of Mr. Johns Hopkins. In 1889, when the hospital was opened, Welch was named pathologist-in-chief. When the school of medicine opened in 1893, Welch was the first dean. He then helped organize the Johns Hopkins University School of Hygiene and Public Health and became its first director. He also founded and served as the first director of the Institute of the History of Medicine at the Johns Hopkins University. Welch took an active role in national and international medical affairs, serving as president of several organizations and associations.