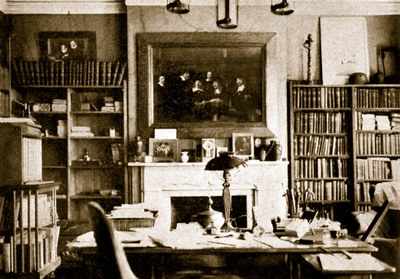 Courtesy of Medical Archives of The Johns Hopkins Medical Institutions

In one direction Welch fell further and further behind. One perquisite of every great influential had come to be possession of a scholarly journal, and Welch founded in 1896 a much needed Journal of Experimental Medicine. In a short time contributors began to find that their manuscripts had been swallowed up unto some kind of abyss and were never heard from again. Frantic letters asking for the return of the article for publication elsewhere met with no response. Hurd would sometimes scavenge through Welch’s study and retrieve a manuscript – in Welch’s absence – but the situation rapidly became hopeless. In the end, to Welch’s great relief, possession of the Journal passed from Johns Hopkins to the Rockefeller Institute in 1902. - Donald Fleming. William H. Welch and the rise of modern medicine. Boston, 1954