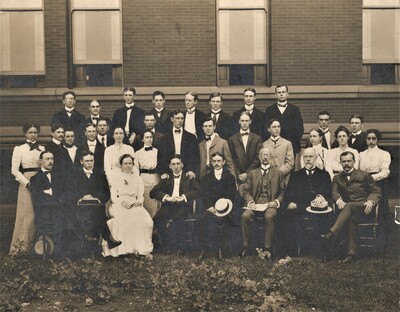 Johns Hopkins School of Medicine, Class of 1900 (Sabin is in the second row, on the far left side)

Sabin entered the Johns Hopkins School of Medicine in 1896, one of fourteen women in a class of forty-five. Her skill and originality in laboratory classes attracted the attention of anatomist Franklin P. Mall, one of Hopkins' outstanding scientists. Mall became Sabin's mentor, advocate, and intellectual role model, encouraging her pursuit of "pure" (rather than applied) science and suggesting two projects which would help establish her research reputation. One of these was a three-dimensional model of a newborn baby's brainstem, which became the basis of a widely used textbook, An Atlas of the Medulla and Midbrain, published in 1901. The other project was an investigation of the embryological development of the lymphatic system.