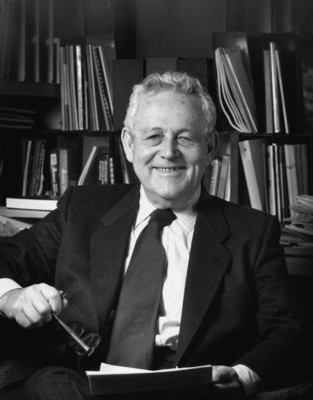 Schoenfeld, Robert L. ( 1920-2007) was a pioneer in computer applications to medical experiments. His inventiveness in the lab contributed to the success of many fellow scientists.

After earning bachelor’s degrees in psychology and electrical engineering, he served as the second lieutenant in the United States Army Signal Corps. After World War II, he worked as an engineer and researcher for 10 years. He earned both a master’s degree and a doctorate of electrical engineering from the Polytechnic Institute, in 1949 and 1956 respectively. Following a research fellowship at Sloan-Kettering Institute and professorships at Polytechnic, he joined Rockefeller University in 1957 as an electrical engineer in the Electronics Shop, later known as the Laboratory of Electronics.

In his later years, his interest in neuroscience led him to author a book titled Explorers of the Nervous System: With Electronics, an Institutional Base, a Network of Scientists. Published in 2006, the book comprises a history of major 20th-century milestones in the study of neuroscience and discusses the importance of technology, mathematics and the physical sciences in the field, all examined through the lens of the author’s half-century career at Rockefeller.