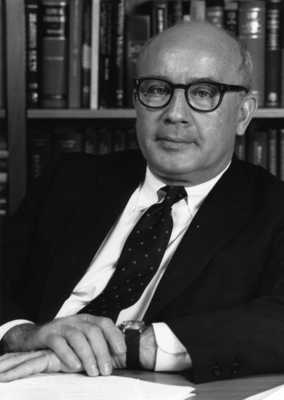 Kappas, Attallah (1926-2018) was a leading authority in diseases related to liver function and metabolism and in the development of diagnostics and treatments for those conditions.

One of Kappas’ most far-ranging and lasting contributions was in research uncovering the molecular mechanisms that instigate jaundice in newborn babies. Jaundice, which affects more than half of all babies to some degree, is caused by high levels of bilirubin, a yellow pigment in the blood that is normally metabolized by the liver. If the condition goes untreated, it can cause irreversible damage to the central nervous system.

Kappas was the physician-in-chief of Rockefeller’s hospital from 1974 to 1991 and served as a Rockefeller vice president from 1983 to 1991. He also had affiliations with Memorial Sloan Kettering Cancer Center, Weill Cornell Medical College, Johns Hopkins University Hospital, the Peter Bent Brigham Hospital, and the Karolinska Institute.

See also Endocrine-gene Interactions in the Hereditary Liver Disease, Acute Intermittent Porphyria, Management of Severe Newborn Jaundice: Changing the Clinical Paradigm from Treatment to Prevention, and Nutritional Pharmacology: Regulation of Drug and Hormone Metabolism by Components of the Human Diet