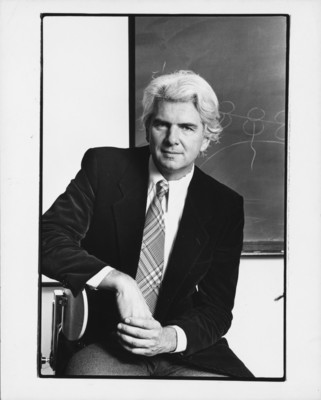 Blobel, Günter (1936-2018) was a Silesian German and American biologist and 1999 Nobel Prize laureate in Physiology for the discovery that proteins have intrinsic signals that govern their transport and localization in the cell. His monumental contributions established research paradigms for major arenas of molecular cell biology.

Blobel was born in Waltersdorf, Germany (now part of Poland), in 1936. In early 1945, fleeing the advancing Russian army, his family went to live with relatives near Dresden, where they witnessed the firebombing of the city by the Allies. After the war, they settled in Freiberg, in what had become East Germany. Blobel received his M.D. from the University of Tübingen in 1960 and, after internships at a number of small hospitals in Germany, a Ph.D. from the University of Wisconsin, Madison, in 1967. He was a postdoctoral fellow at Rockefeller for two years before becoming a member of the faculty.

Beyond his scientific work, Blobel was well known for supporting the rebuilding of Dresden. Following the reunification of Germany, he founded U.S.-based group Friends of Dresden in 1995 to support the reconstruction, restoration, and preservation of the city’s artistic and architectural legacy. In memory of his sister Ruth, who was killed in an air raid during the war, Blobel donated almost the entirety of his Nobel prize money for the rebuilding of the Dresden Frauenkirche, a baroque Lutheran church, as well as the building of a new synagogue.

In addition to the Nobel Prize, he received numerous other awards, including the Warburg Medal from the German Society for Biochemistry and Molecular Biology (1983), the E.B. Wilson Medal from the American Society for Cell Biology (1986), the Louisa Gross Horwitz Prize (1989), the Albert Lasker Basic Medical Research Award (1993), and the New York City Mayor’s Award for Excellence in Science and Technology (1997). Blobel was a member of the National Academy of Sciences, the American Academy of Arts and Sciences, the American Philosophical Society, the National Academy of Medicine, the Pontifical Academy of Sciences, and the German Order of Merit.