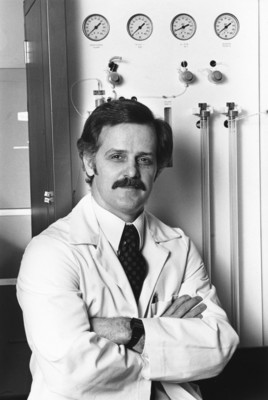 Cunningham, Bruce A. (1940-2017) as a cell biologist and retired faculty member at The Scripps Research Institute.

Cunningham was born in Winnebago, Illinois, on January 18, 1940. He was the second of five sons and a fierce athlete until his sports career was cut short by an injury. He then traveled with teams as a reporter for a local newspaper.

In 1966, Cunningham joined Rockefeller University to work as a postdoctoral fellow for future Nobel laureate Gerald Edelman. The two ended up collaborating for 46 years.

Cunningham’s research focused on understanding the relationships between protein structures and functions, particularly proteins involved at the cell surface and in cell-cell interactions. Shortly after 1966, as a member of the Edelman laboratory, Cunningham was a key participant in determining the first amino acid sequence of a complete protein. He went on to study concanavalin A, a protein that can induce cell division by acting at the cell surface. In the 1980s, what was then the Edelman-Cunningham laboratory turned its focus to cell adhesion molecules, which have important roles in cell-cell interactions starting during early embryogenesis.