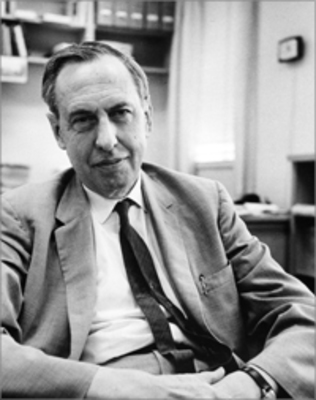 Uhlenbeck, George Eugène (1900-1988) was a Dutch-American theoretical physicist. He received his Ph. D. degree in 1927 from the State University of Leyden in the Netherlands. While pursuing his graduate studies, he collaborated with Samuel A. Guidsmit in the discovery of the electron spin phenomenon. This concept of an electron's characteristic spin angular momentum about a specific axis has proved to be a cornerstone of basic atomic theory. Uhlenbeck joined the University of Michigan faculty in 1927 and was named professor of theoretical physics in 1939 and Henry Cahart University Professor of Physics in 1954. He served as a professor of theoretical physics at the University of Leiden from 1935 to 1939. During World War II, he worked at the Radiation Laboratory at the Massachusetts Institute of Technology. In 1961 he joined the faculty of Rockefeller University where he helped to establish the University's distinguished theoretical physics faculty. He retired from Rockefeller University in 1974 but continued his interest in physics, serving as both mentor to younger physicists and as an appraiser for articles submitted to scientific journals. Among Uhlenbeck's many honors were the Max Planck Medal of the German Physical Society (1964), the National Medal of Science (1977) and the co-recipient of the Wolf Prize (1979). He received honorary degrees from Rockefeller University (1976), Notre Dame University (1953), Case Institute (1960), the University of Colorado (1968) and Yeshiva University (1969). He was elected a member of the National Academy of Sciences in 1955. He was also a member of the American Philosophical Society, the American Academy of Arts and Sciences, the American Association for the Advancement of Science and the American Physical Society, serving as president from 1959-1960.