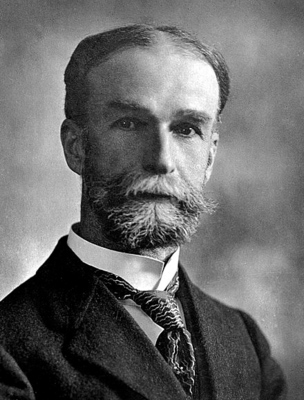 Smith, Theobald (1859-1934) was a pioneering epidemiologist and pathologist and is widely considered to be America's first internationally-significant medical research scientist. He was educated at Cornell (Ph.B. 1881) and at the Albany Medical College (M.D. 1883). In 1884 he was appointed director of the pathological laboratory of the Bureau of Animal Industry, in Washington, where for 11 years he investigated infectious animal diseases. At the same time, he was a professor of bacteriology at Columbian, later known as George Washington, University. From 1895 to 1915 he was director of the pathological laboratory of the Massachusetts State Board of Health, and after 1896 was a professor of comparative pathology at Harvard. In 1915 he was appointed director of the department of animal pathology of the Rockefeller Institute for Medical Research, New York. He made important contributions to the relation between human and bovine tuberculosis.

His numerous scientific papers include Investigations into the Nature, Causation, and Prevention of Texas or Southern Cattle Fever (1893); Investigations Concerning Bovine Tuberculosis with Special Reference to Diagnosis and Prevention (1894); Investigations of Diseases of Domesticated Animals (1897); The Agglutinative Affinities of Related Bacteria Parasitic in Different Hosts (1903) and Certain Aspects of Natural and Acquired Resistance to Tuberculosis and Their Bearing on Preventive Measures (1916).