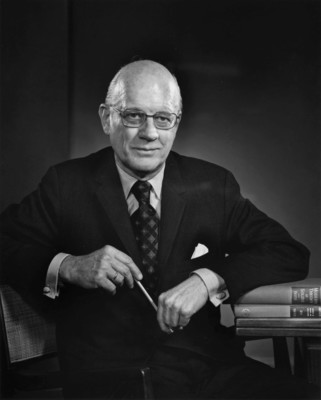 Seitz, Frederick (1911-2008) was an American physicist and a pioneer of solid-state physics. Seitz was the 4th president of Rockefeller University from 1968–1978, and the 17th president of the United States National Academy of Sciences from 1962–1969.

In 1932 Seitz graduated from Stanford and went on to attend graduate school at Princeton in 1934. He was a Professor and Head of the Physics Department at the Carnegie Institute of Technology, now Carnegie Mellon University. At the beginning of his career he joined the faculties of the University of Rochester and the University of Pennsylvania. During World War II he served on several wartime committees including the National Defense Research Committee, which conducted research on radar, ballistics, and the development of the atomic bomb.

After the war, he worked at the Oak Ridge National Laboratory as the Director of the Atomic Energy Training Program. In 1949 he became a Research Professor of Physics and eventually Chairman of the Department of Physics at the University of Illinois. From 1968 to 1978, Seitz served as the President of Rockefeller University where he introduced new biological programs such as cell and molecular biology. In addition, he created an M.D. –Ph.D. program with Cornell University Medical College. In 1973 Seitz was awarded the National Medal of Science by President Nixon for his contributions to the modern quantum theory.