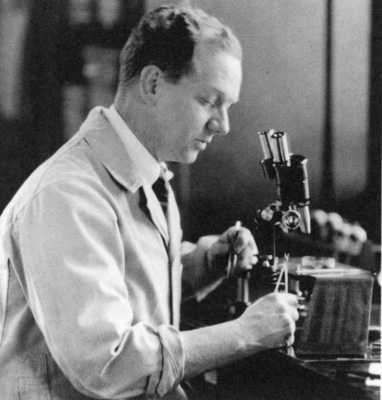 Peyton Rous at his microscope, 1923

Rous, Peyton (1879-1970) was an American Nobel Prize-winning virologist. He received the BA from The Johns Hopkins University in 1900, and the MD from that university's Medical School in 1905. After teaching pathology at the University of Michigan, he joined the Rockefeller Institute in 1909, becoming a full member (professor) in 1930. He remained at Rockefeller his entire career. Among dozens of awards and honorary degrees, he received the National Medal of Science (1965), the Lasker Award (1958), and the Nobel Prize (1966). Rous also was elected to the U.S. National Academy of Sciences. He served as an editor of the Journal of Experimental Medicine from 1922 to 1970.

See also Discovering the First Cancer-Causing Virus, The First Blood Bank, and Biographical Memoirs of Fellows of the Royal Society