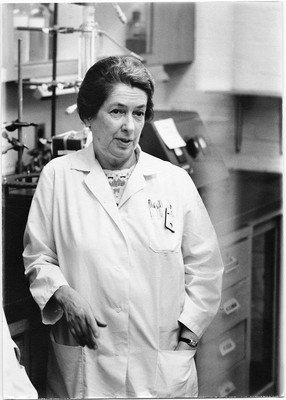 Gertrude Perlmann in her laboratory at The Rockefeller University, 1973

Perlmann, Gertrude Erika (1912-1974) was a Czechoslovakian-born U.S. biochemist and structural biologist.She attended the German University of Prague, from which she received her D.Sc. degree in 1936. Following graduation, she worked at the Biological Laboratory of the Carlsberg Foundation and the Carlsberg Laboratory in Copenhagen. Perlmann moved to the United States of America where she worked a the Harvard Medical School, the Massachusetts General Hospital, and the Rockefeller Institute. Perlmann is most noted for her work in protein chemistry. Early in her research career, she used electrophoresis to discover the structure of egg albumin. Next, she moved to a study of pepsin, an amino acid. She is also known for her studies of the protein phosvitin. For her biochemical research, Gertrude Perlmann was awarded the Garvan Medal of the American Chemical Society in 1965.