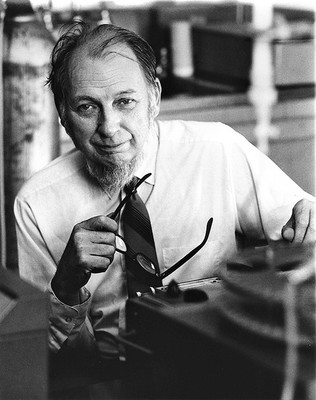 Rollin Douglas Hotchkiss (1911 – 2004) was an American biochemist who helped to establish the role of DNA as the genetic material and contributed to the isolation and purification of the first antibiotics. His work on bacterial transformation helped lay the groundwork for the field of molecular genetics. At the Rockefeller Institute, Hotchkiss initially worked as an assistant to Oswald Avery and Walter Goebel and was encouraged to learn more biology at a summer course at the Marine Biological Laboratory. His early work isolating and synthesizing derivatives of glucuronic acid led to the identification of one of the specific polysaccharides in the capsule of type III pneumococci. Hotchkiss spent the 1937-1938 academic year in the lab of Heinz Holter and Kaj Linderstrøm-Lang at Carlsberg Laboratory learning protein analysis techniques. In 1938, he began collaborating with René Dubos to isolate and study antibiotics produced by soil bacteria. Their work on gramicidin and tyrocidine led to the first commercial antibiotics, and with Fritz Lipmann, they found that the antibiotics include D-amino acids.