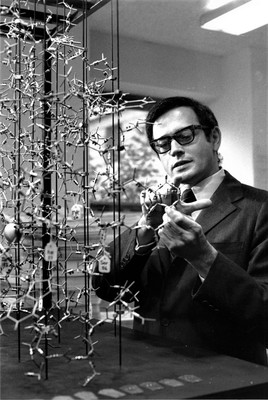 Gerald M. Edelman at his laboratory, 1972

Edelman was born in New York City on July 1, 1929. At first, embarking on a career as a professional violinist, he changed course to pursue science, earning a BS degree at Ursinus College magna cum laude (1950) and an MD at the University of Pennsylvania (1954). He spent a year at the Johnson Foundation of Medical Physics, and, after a medical house officership at the Massachusetts General Hospital, he served as a captain in the Army Medical Corps attached to the American Hospital in Neuilly-sur-Seine, France. He returned to the United States in 1958, and in 1960 he earned a Ph.D. at The Rockefeller Institute (now University), where he stayed on as a member of the faculty.