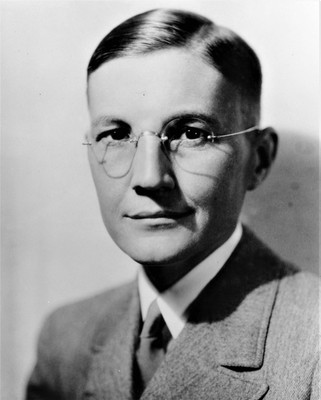 Herbert Spencer Gasser, 1888-1963, physiologist, was Director of The Rockefeller Institute for Medical Research, 1935-1953. His early work at the University of Wisconsin and at Washington University was done on circulation and respiration, including the mechanism through which the heart is accelerated in exercise and the rate of decreased oxidation in the respiratory center. Later at Washington University and at Cornell University Medical College, his major interest was in the physiology of nerve, developing electrophysiological techniques through the development of vacuum tube amplification and the cathode ray oscillograph. In collaboration with Joseph Erlanger, also of Washington University, he developed an exhaustive determination of the constants of nerve fibers and the classification of nerve fibers in accordance with their properties. The two men shared the Nobel Prize in Medicine and Physiology in 1944 for this work.