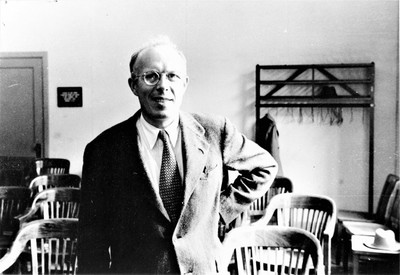 René J. Dubos earned a degree from the Institute National Agronomique in France and received a Ph.D. from Rutgers University in 1927. He joined the Rockefeller Institute that year and remained there his entire career except for two years, 1942-1944, when he was at Harvard University. Author of some two dozen books, Dubos is remembered both as a scientist and as an environmentalist who focused on the interrelationships between environmental health and human health. His book, So Human an Animal, won the Pulitzer Prize in 1969. Among many awards and honors, Dubos received the Lasker Award in 1948 and he was elected to the U.S. National Academy of Sciences. He served as an editor of the Journal of Experimental Medicine from 1946 to 1972.

See also Gramicidin: Ushering in the Scientific Era of Antibiotic Discovery and Therapy, Friend of the Good Earth, and National Academy of Sciences Biographical Memoir

Exhibit The Life of Rene Dubos: Choosing to Be Human