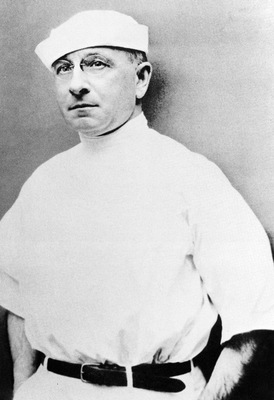 Alexis Carrel at the Rockefeller Institute after World War I, ca. 1919

Alexis Carrel was born and educated in Lyons, France, and he received his medical degree from the University of Lyons in 1900. He remained there, teaching and doing research, until 1904. That year, after a short stay in Montreal, he took a research position at the University of Chicago. In 1906, Simon Flexner invited Carrel to join the Rockefeller Institute, where he remained until 1939. Carrel returned to France that year, as World War II began in Europe. During the early 1940s, in Paris, he headed a Foundation for the Study of Human Problems, which was supported by the Vichy government. Carrel's extreme views on politics and religion remain a subject of controversy.

Exhibit Odyssey in Science and Medicine