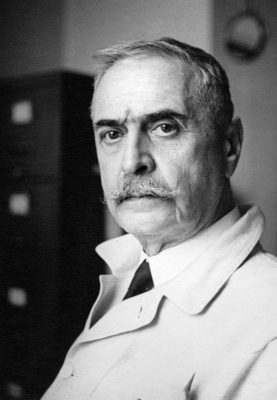 Karl Landsteiner was born near Vienna, Austria in 1868. He received his MD from the University of Vienna in 1891, and for the next five years studied in the laboratories of prominent chemists, including Emil Fischer. From 1897 to 1919 Landsteiner held positions at the Pathological Anatomical Institute in Vienna, the Wilhelminen Hospital, and the University of Vienna, including a professor of pathological anatomy. Anti-Semitism in Austria after World War I made it difficult for Landsteiner to advance his career, and he left for a post at a hospital in The Hague. Then, late in 1921, Simon Flexner invited him to become a member of the Rockefeller Institute. Landsteiner remained at Rockefeller until his death in 1943. In addition to the Nobel Prize (1930), Landsteiner's achievements were recognized with election to the U.S. National Academy of Sciences and with the Lasker Award (1946).

See also The Rh Factor: Enhancing the Safety of Blood Transfusion and Setting the Stage for Preventing Hemolytic Disease of the Newborn and Rickettsia prowazekii Reproduces Only in Living Cells