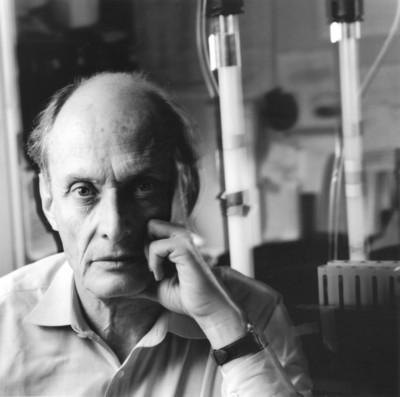 Greengard, Paul ( 1925-2019) was an American neuroscientist best known for his work on the molecular and cellular functions of neurons. In 2000, Greengard, Arvid Carlsson, and Eric Kandel were awarded the Nobel Prize for Physiology or Medicine for their discoveries concerning signal transduction in the nervous system.

Having established by the early 1980s how most neuronal communication actually occurs, Greengard set about exploring how aberrations in specific pathways might lead to various brain disorders. At the same time, he began investigating the molecular basis by which the drugs used to treat those conditions achieved their effects. His work greatly advanced our understanding of neurological and psychiatric disorders and pointed the way towards entirely new classes of drugs to treat them.

Greengard received the AB from Hamilton College (1948) and the Ph.D. from Johns Hopkins University (1953). After postdoctoral studies in England at the University of London, Cambridge University, and the National Institute of Medical Research, and at the National Institutes of Health, in Bethesda, MD, he became director of biochemical research at the Geigy Research Laboratories in 1959. In 1968 he was appointed professor of pharmacology at Yale University and was named Henry Bronson Professor in 1981. In 1983, he joined The Rockefeller University as a Vincent Astor Professor. He also was director of the Fisher Center for Alzheimer’s Disease Research at Rockefeller.

With his wife, the renowned sculptor Ursula von Rydingsvard, Greengard used the full sum of his Nobel Prize money to create an award for outstanding women in biomedical research. Greengard named the award after his mother, Pearl Meister Greengard, who died giving birth to him; and he hoped it would increase the likelihood that women would receive their fair share of the highest honors in science.