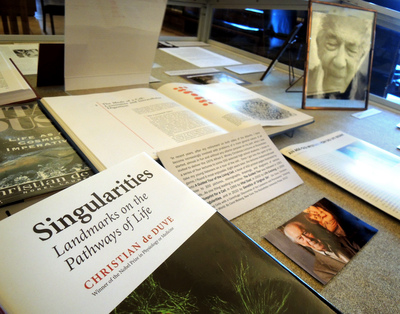 “In recent years, after my retirement on both sides of the Atlantic, I have become increasingly involved with problems of a more general nature. It all started, almost in fun and without any ulterior purpose on my part, when I was invited to deliver the 1976 Alfred E. Mirsky Christmas Lectures at Rockefeller, a series of four lectures to some 550 selected high school students. I chose to take my young listeners on a tour of the cell… Once I got into the spirit of the game, I found it most enjoyable. Eight years later, the lectures metamorphosed into A Guided Tour of the Living Cell, a book of 450 printed pages illustrated by close to 300 pictures, micrographs, drawings, and diagrams of various kinds…As one thing leading to another, The Guided Tour was followed in 1991 by Blueprint for a Cell, in 1995 by Vital Dust, in 2002 by Life Evolving, in 2005 by Singularities, and in 2010 by Genetics of Original Sin”. (De Duve, Christian. “Exploring Cells with a Centrifuge: Discoveries of the Lysosome and Peroxisome.” Entering an Unseen World. By Carol Moberg. New York: The Rockefeller University Press, 2012)