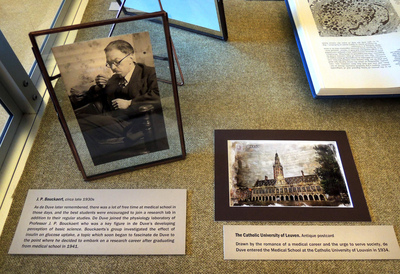 As de Duve later remembered, there was a lot of free time at medical school in those days, and the best students were encouraged to join a research lab in addition to their regular studies. De Duve joined the physiology laboratory of Professor J. P. Bouckaert who was a key figure in de Duve’s developing perception of basic science. Bouckaert's group investigated the effect of insulin on glucose uptake, a topic which soon began to fascinate de Duve to the point where he decided to embark on a research career after graduating from medical school in 1941