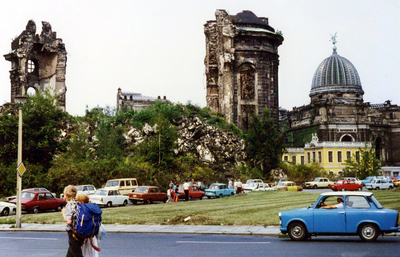 For years, the ruins of Dresden served as a symbol of the insanity of war. It was not until 1989, with a collapse of the Berlin Wall, that people began to talk seriously about rebuilding the cathedral. Other buildings – the Semper Opera House, the Zwinger, the Hofkirche – have been rebuilt. But the Frauenkirche was special. More than any other building, it had dominated the city skyline. More than anything else, its absence symbolized for the residents of Dresden all they had lost.