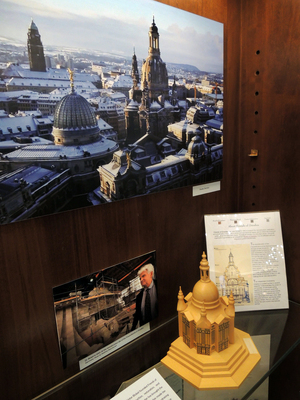 In 1995, following the reunification of Germany, Günter Blobel founded Friends of Dresden, U.S.-based group to support the reconstruction, restoration, and preservation of the city’s artistic and architectural legacy. Günter has brought the same intensity and passion to this project as he has to science. He has made ties with similar groups in Germany and in Britain, attending numerous fundraising events on both sides of the Atlantic and wondered how much more he could give. Then in year of 2000, Blobel donated almost the entirety of his Nobel Prize money for the rebuilding of the Dresden Frauenkirche, a Lutheran church and baroque architectural masterpiece, and the Dresden Synagogue that was destroyed by the Nazis on Kristallnacht in 1938.