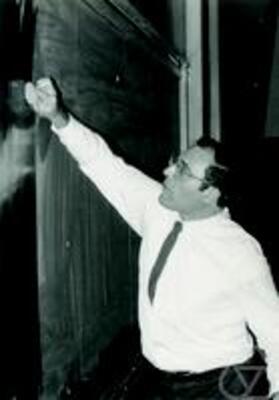 Gian-Carlo Rota (1932 – 1999) was an Italian-American mathematician and philosopher. He spent most of his career at the Massachusetts Institute of Technology, where he worked in combinatorics, functional analysis, probability theory, and phenomenology. He was credited with transforming the field of combinatorial analysis, or combinatorics, from an insignificant area into one of the most important branches of modern mathematics. He reinterpreted the problems of traditional combinatory analysis in terms of the general concepts of algebra, which served as a catalyst for the development of combinatorics. Rota used this redefining to show how Möbius functions, umbral calculus, Whitney’s matroids, and the determination of algebraic invariants were all associated with a familiar and specific kind of algebraic structure, allowing for the systematic derivation of new combinatorial formulas. This research was revolutionary because the consolidation of algebraic structures opposed the continual tendency of mathematics to fragment and it provided systematic methods for applied mathematics to solve problems in unrelated applications. Rota also made contributions to the theory of differential equations, functional analysis, ergodic theory, and philosophy.